Martyn Gerrard partnered with flatfair in August 2020, to offer flatfair No Deposit to their tenants and landlords, and have seen lots of success so far.

Getting to know Martyn Gerrard

Martyn Gerrard have 10 branches spanning across North and North West London and last year scooped up impressive property awards such as the EA Masters Best Estate Agent and The Negotiator Award in Large Letting Agency category.

Working together to offer a choice

Greg Tsuman, Lettings Director at Martyn Gerrard says that “the benefits to tenants of using flatfair are quite clear, you can move into the property without having to pay five weeks rent, which is often more than £2000 where we are”. 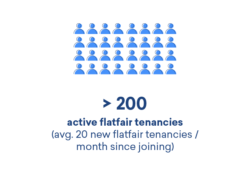 This is why they create an impressive 20 No Deposit plans per month on average and have more than 200 tenancies active with flatfair.

“The fact that it is non-insurance based makes it easier for the teams at Martyn Gerrard to offer it to landlords and tenants, as landlords are not reliant on an insurer making a decision at the end of the tenancy”.

Martyn Gerrard use the flatfair and Goodlord integration, which means it is even easier to create a flatfair plan, and leaves less room for error.

With just a one-off cost, the average tenant at Martyn Gerrard has saved £1,600, that’s a whole lot of money to put towards a deposit for a house or some fun in the sun, and with a total of £200,000 already saved for their tenants, the future is looking very bright.

We do a good job protecting landlords too

Their landlords are also happy to use flatfair No Deposit, and that comes as no surprise when up to £500k has already been protected for their landlords in the event of any accidental damage or rent arrears.

Our hotel-like model (where tenants simply pay for any damages or rent arrears at the end of tenancy), means that they are confident that by using flatfair they are not exposing their landlords to any unnecessary risk and the end of tenancy process is as robust as with a traditional deposit, but their landlords are put back in pocket significantly faster with flatfair.

On average, it takes tenants using a traditional deposit 5 weeks to receive it back, but for their tenants on a No Deposit plan, there are no such worries, having the money to move into their next property right away.

As many are now saying ‘flatfair is the future’. To see how we can help your landlords, and tenants to, get in touch partnerships@flatfair.co.uk

At flatfair, our employees are our most prized asset, so we thought we’d introduce you to some…